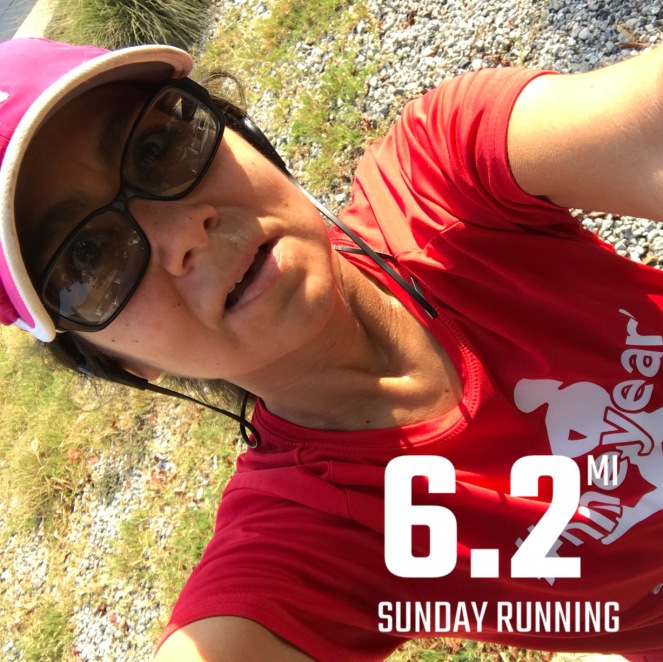 This was an interesting weekend.  My husband is a musician and has two local shows this weekend.  One on Friday and one tonight.  This means that we get home pretty late and it’s safe to assume that I will be very tired the next morning.  My group runs aka long runs are Saturday mornings in Santa Monica.   A little bit of a drive, but since we start early, there’s no traffic and I’m there in about 30 minutes; which is great.  When I signed up for the L.A. Leggers, I did have a concern about having to drive that distance once a week just for a long run.  I thought that maybe I could just do it on my own…I’m glad I didn’t.

It has been an adjustment running with a group.  I forego my music, I’m somewhat locked into a 2 x 2 formation, lots of call outs like “footing” to be aware of something that can trip me up, or ” walker right” meaning there’s a slower person walking up on the right, etc.  It’s definitely different from running by myself but I have been enjoying it.  It’s great running next to someone who is going through what you’re going through and other’s who have had success with this training plan.  I’ve felt really good about my last couple of runs of 4 and 5 miles.  I’ve found my runners high and I’m feeling good about the pace group that I’m in, which is 12:30 mm.

So with this odd weekend of going out late and planning on being tired the next morning, I planned on running my long run on my own.  I thought this would probably be better than trying to do it on Saturday on just 2 hours of sleep.  Since we are in the 100 degree temperatures this week, I opted not to do it on Saturday so I could sleep in and chose to do it today, Sunday, where I would have a better chance of catching an early morning aka cooler temperature while I run.  Well I was still a bit tired from Friday night and didn’t get out the door until close to 9:00am and it was already 89 degrees out.  Unfortunately, here in L.A. we are experiencing the La Tuna fire which has been burning for the last couple of days.  I’m about 10 miles away from it, but there is ash around my home and in my pool and of course there is the smell of smoke in the air.  So I I knew this was going to be a tough run, but I prepped myself with my hydration belt with water, gels and a bandana for when I might need it.  My plan initially was to drive to a local park since I would be doing a 10K and I thought the atmosphere would be nicer.  But then I remembered it’s Labor Day weekend and the park might be crowded by that time; so I kept to my usual near the house route.  This meant that I had to make 6 laps around my blocks which sounds boring….and it was!

I felt ok starting out and I just told myself that I’m doing my usual run, twice.  That I just needed to get through the initial 3 miles and then the real workout would be after that.  Mind you, I’ve never run 6.2 miles before so I admit I was a little nervous about it.  That is half of the distance of the race that I’m training for so it was a meaningful run to me.  I made the mistake of wearing a regular running shirt rather than a tank top.  I was pretty hot right out the door.  It was humid and I just tried to ignore the smoke smell as best I could.

Even the first 3 miles were tough.  I went through one of my water bottles in that time which is odd and I was just sweating up a storm and used my bandana to constantly wipe my face.  After the three, I tried one of my new Huma gels.  It was blueberry flavored and tasted horrible but I ate it and drank plenty of water with it.  By mile 4 I felt like stopping thinking this is not the best way to run my first 10K.  My home was pretty close and I could just walk there and be proud of doing 4 miles.  But I told myself to just keep moving.  I thought if I can’t make it 6.2 miles on my own then how will I make 13.1 miles?!  I didn’t want to give up and just kept moving.  By mile 5 I could see mile 6 in my grasp and just kept moving.  Nearly all of my water was gone by then but I saved enough to get me through the end.

6.2 was finally here!  The funny thing is that I wasn’t burnt out.  I think I could’ve kept going.  The heat was just the worst of it and it really messed with my head.  My body was fine, my breathing was ok, I wasn’t hurting; but the damn heat made me feel like cutting my long run short.

So I learned a couple of things, do my best to get out to run as early as possible.  Enjoy and respect the group long run.  It has built in motivation and doesn’t give me time to second guess myself.  I don’t plan on missing any other long runs so hopefully I won’t have to deal with this again.  But at least I know a few things to do differently like just get out to the park so I’m not bored.  Pick a gel that I know that I like.  Make an extra long playlist so that I don’t have to listen to my playlist twice.  And maybe try finding someone in my group who might want to do the long run on Sunday with me.  Nothing wrong with feeding off of someone else’s motivation to encourage my own.  By the way…doing the 6.2 makes me feel like a badass!

View all posts by Running Rain